This portion of the blog will be devoted to the fun things We do while you guys sleep in the US.
Many things remind me of my year in Germany in 2004. I don't know that the countries are that much alike, but more that this is the second time since then that I have spent time in a European country... I have been in Asia and South America in the last 10 years.... But Europe just seems to feel similar, yet oh so different.
I've been here about 24 hours now. Today's adventure was a trip to the grocery store. I had short flashbacks to my first days in Germany, when I didn't know the language, the customs of the grocery store, and was trying as hard as possible to look as little like an American as I could. (Failing miserably, I am sure)
I walked approximately 1km to the store. Trying to note markers along to way so I would remember how to get back. I also, though, was trying not to look like a tourist trying to figure out what was going on. I have my black coat and black boots, but forgot my scarf at the missionary home where I am staying. I think that gave me away. Everyone else had on either a scarf or a hat of some sort.  I had to cross over two streets..... This was much different than Germany, as here, it's pretty chaotic on the street... I had a green light to cross, yet cars were still coming very close. I kept walking, as I had seen others do. I am surprised there aren't more pedestrian injuries.
Finding the grocery store was easy. When I got inside, though, there is a section of small lockers. I can't read the instructions. Some ladies were putting their kids bags and backpacks in the lockers. I wasn't sure if I should put my purse there or not. I didn't. I went through the turnstile. The fruits and veggies were first. Pretty easy. Grabbed some bananas. Moved on.
Juices all have a picture on the front of what they are. I got apple/strawberry juice. Moved on. I chose my bread by the simple fact that it was already sliced. Didn't want to have to ask for it to be cut for me. Found some salami and some cheese already sliced as well. Feeling confident now, I got eggs and frozen pizza and headed to the counter. One more item, chocolate. KINDER chocolate! I haven't had it since 2004!
At is point I am feeling like I am ok. I avoided having to talk to anyone. I have recognizable food in hand.
I knew I would need to buy a bag for my groceries. When she asked me, I just said "I don't speak Ukrainian." She showed me a bag, I nodded. This is when it gets obvious that I'm new here.
She lays the bag, open on the counter, begins to scan my items, but lays them all around the bag. I am unsure if I should bag them myself, so, I don't do anything. She quotes my price, I pay, I get change, and she starts scanning the stuff for the next guy. So now, I have to put up my change and try to bag my groceries while this guy is all up behind me. Apparently, I should have started bagging while she checked me out. She finishes with him (cigarets and beer....) and starts with guy #2 while I am still trying to get my frozen pizza in my bag.
I still have to figure out what to do with my little shopping basket. I grab it from the floor and have to find a place for it... I see a small stack in the corner, it wasn't conveniently located. I didn't see anyone else stack theirs there.... But I did it anyway.
I dropped my head and took my bag of groceries out.
Other than the small issue at checkout. I feel like I was quite successful at blending on my first trip out. I didn't get yelled at, at least out loud. I may have been talked about, but if so. I didn't know it.
Gotta learn some more basic language. Fast.
The only other mistake I made was apparently people don't smile at each other here. I remember this in Germany.... But needed to be reminded. I passed a grandmother with a sweet 3-4 year old all bundled up (it's only about 45 degrees, cool, but not unbearable.... But she was bundled for a snowstorm! Full out ski bibs and everything!!!) I smiled at the little girl. Grandmother pulled at her hand quickly, gave me a dirty look. The child looked confused by the whole thing. Note: smiling at children you don't know makes you look like an outsider, apparently.
So, I'm back at the house now. I have eaten my lunch and have plans to visit Lena again this afternoon. I can't wait!
Wonder if I can get nbc.com to keep me up to date on Chicago fire?
Some of my snacks. 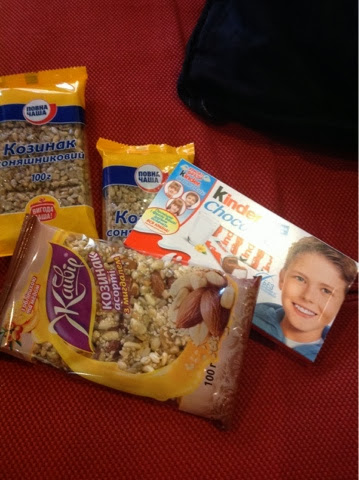 Do you Love Coffee? Click the link below to order amazing coffee----- and Help Bring Lena Home! https://justlovecoffee.com/Mayhewadoption